The Orban Model 8100A/XT2 Six-Band Limiter Accessory Chassis was designed for those stations that need a “louder” or more processed sound than that provided by an OPTIMOD-FM used alone and in the recommended manner. The XT2 provides the means to fine-tune your on-air sound through precise control of Bass and treble sound texture, program density, and program dynamics. The XT2 is designed to give you: - Increased loudness for a given level of audible processing side-effects (compared to an unmodified 8100A/1). - Improved consistency from source to source, due to the “automatic equalization” effect of the six-band limiter. - Increased presence and intelligibility on smaller radios and in autos. - Control of Bass and high-frequency equalization. The XT2 is particularly well-suited for highly competitive pop music formats, such as AOR, CHR, AC, and Urban Contemporary. Oldie and BeautiM formats can also benefit from the improved consistency that the XT2’s “automatic equalization” can provide. Because it has been specifically “tuned” to the OPTIMOD-FM, it produces less processing side-effects than do complex processing systems that use OPTIMOD-FM cascaded with other processors. (The XT2 cannot be used with other audio processors or as a stand alone unit.) In general, the 8100A/1 + XT2 System will be only slightly louder than an 8100A/1 alone, operated with very fast release times and large amounts of clipping. This is because the loudness capabilities of an audio processor system are primarily determined by the design of the peak-limiting system, and the XT2’s peak-limiting system is very similar to the highly sophisticated, patented system used in the 8100A/1. Any loudness increase produced by the XT2 results from two characteristics: 1) the XT2 can automatically re-equalize dull program material, increasing energy in the frequency range to which the ear is most sensitive, and 2) XT2 processing reduces voice level by comparison to music. Since the clipping level in a processor system must often be set to avoid audible voice distortion, the XT2 permits the processor to be adjusted to produce higher loudness on music before voice distortion becomes objectionable. Because of the XT2’s “automatic equalization” of program material, there is some material (notably “heavy metal” with extreme amounts of 3kHz energy) which will actually be quieter through the XT2 than through the 8100A/1 alone because the amount of 3kHz energy (to which the ear is maximally sensitive) will be reduced by the XT2. The primary advantages of the 8100A/1 + XT2 System are improved consistency, increased brightness on naturally dull program material, and reduction of audible processing side effects — all while retaining or slightly exceeding the high loudness capabilities of an aggressively operated 8100A/1. 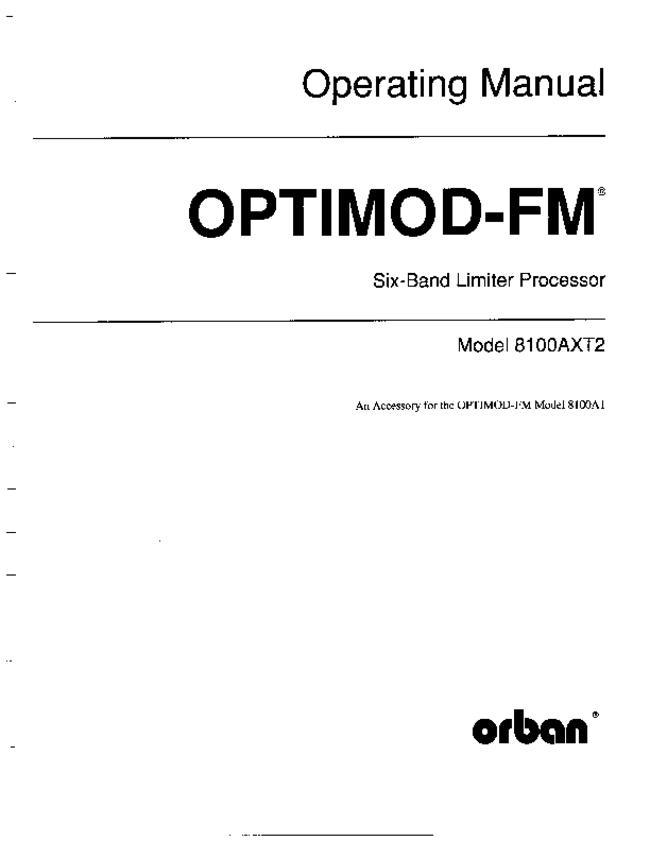