The Radio section is a high sensitivity superheterodyne , using a larpe diameter loopstick aerial for increased signal pickup and incorporating two I.F . amplifiers 1'nr high sensitivity. Drift transistors áre used throughout for high gain and s tab ility . The loop3ticl: winding is matched to the se lf oscillating mixer for optimum signal to noise ratio and the I.F . signal is fed to the I.F . Amplifier by means of a bottom capacitively coupled bandpass circuit consisting of L3, L4 and the coupling capacitor C8. The base circuit of both I.F . amplifiers is matched to the I.F . coils by means of a capacitive tap to ensure high transfer efficiency. The diode detector D2 is arranged to give positive output voltage, and A.V.C. io applied to the f ir s t I.F . amplifier and to the Converter via the damping diode Dl. The f i r s t I.F . Amplifier also acts as D.C. Amplifier for the damping diode and enables the audio output to be held constant over widely varying input signals. A high resistance volume control is connected across the diode load R14 to make low listening levels possible and to give the correct volume control law. A bass boost network, consisting of R16 and C21, is connected to the tap on the volume control to give loudness compensation at low volumes. The 8'jdio preamplifier and driver are a D.C. coupled pair, with D.C. feed-back applied by means of R18, R22 and R21, giving good thermal stab ility . The output stage is connected in series push pull, so that the output transformer may be omitted, thus eliminating any power loss and giving greater battery economy, as well as extending the frequency range. The transistors are adjusted for B class operation and quiescent current is set by the base divider networks. Each transistor has an unbypassed emitter resistor to equalise their characteristics and they are thermally compensated by the N.T.C. resistors R27, R28, and the shunt resistors R25, R26. Negative feedback is also applied via the bias resistors R29, R30 and by C26, G27, allowing the output stage to run with very low distortion. To further reduce the distortion and to minimise gain variations, negative feedback is applied overall by R24 and the unbypassed emitter resistor R20. Because of the large D.C. feedback and thermal compensation the Receiver may be run at temperatures as high as 120° F. 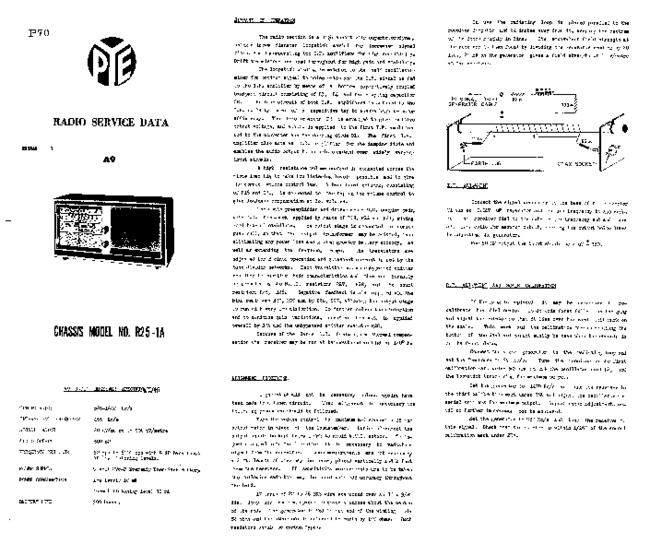