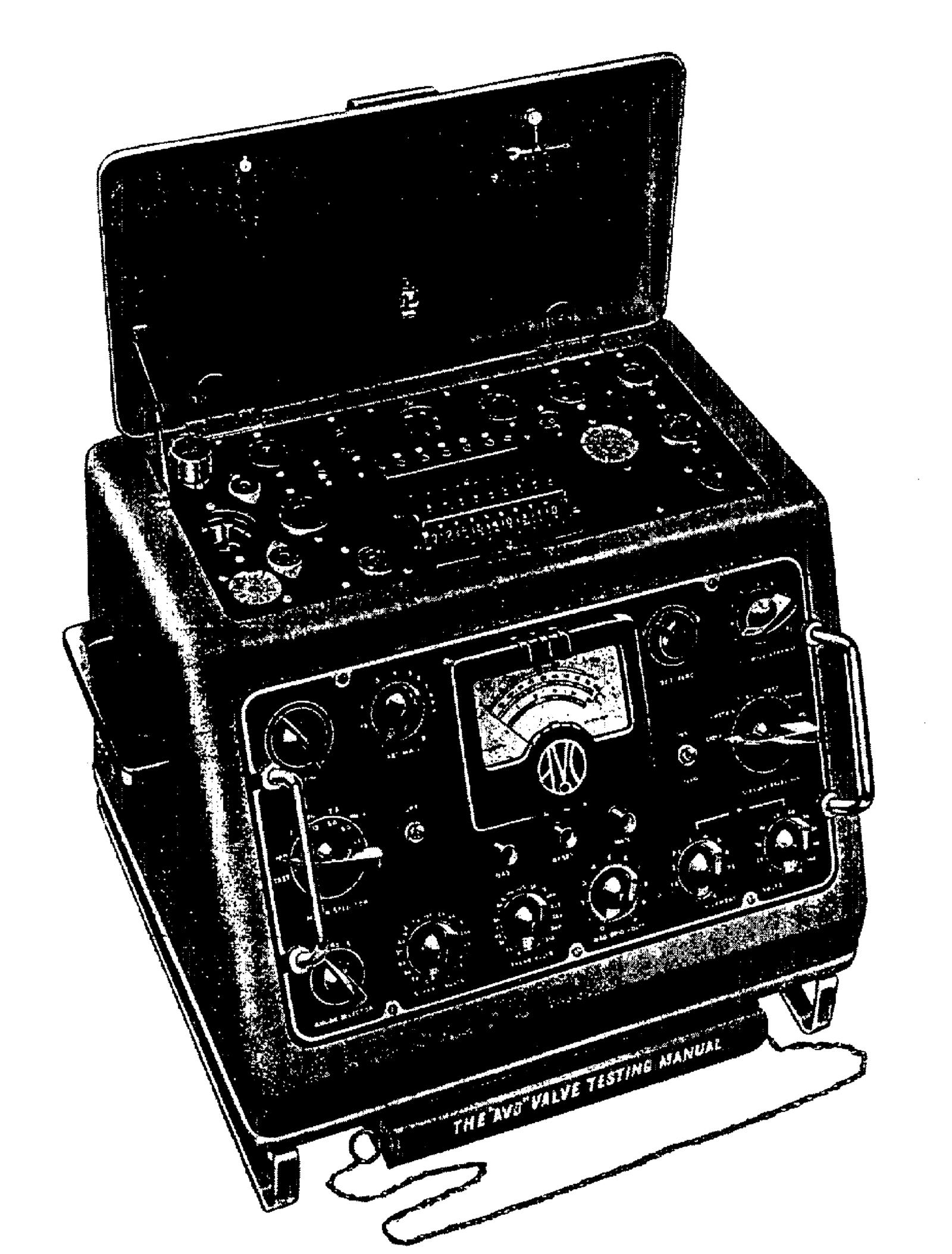 'The problem of designing a Valve Testing Instrument capable of giving a true and A comprehensive picture of the state of any valve, has always been one of considerable magnitude, increasing in complexity as new valve types are brought into general use. For a quick general purpose test necessitating a minimum of time and technical effort, a mutual conductance figure will give an adequate idea of a valve’s usefulness, and the original “AVO ” Valve Tester was designed to test the efficiency of valves on this basis. Whilst a Valve Tester must, of necessity, be accompanied by a data book correlating the results of the Tester with the condition of the valve in question, a purely empirical figure, if used as a standard, will always give rise to doubts in the mind of the operator. The instrument should therefore, produce a figure which can be compared with some standard quoted by the valve manufacturer, if the operator is to use his instrument with confidence. For this reason the “AVO ” Valve Tester used the static zero bias mutual conductance figure as a basis of comparison, this figure being at that time almost universally quoted by the valve manufacturer. In order to reproduce this standard correctly, it was also necessary to reproduce the stated values of DC anode and screen voltage, a matter of some considerable difficulty when it is realised that for any stated condition of anode and/or screen volts the corresponding electrode currents can vary over very wide limits, and in the case of valves of low initial anode current and high slope, the actuation of the control which produces the milliamp-per-volt reading might easily double the anode current flowing. With D.C. methods of testing the inherent internal resistance of the rectifying circuits used could be such as to give regulation errors which could cause results to be meaningless unless complicated thermionic stabilising circuits and a vast array of monitoring meters were used in all voltage supply circuits. Such complications would not only render the Tester of prohibitive price and size, but would considerably increase the complication of operation for the non-technical user. The problem was overcome by the introduction of the AC method of operation (Patent No. 480752) by which means the necessary DC test conditions were correctly simulated and a true mutual conductance figure produced by the application of AC voltages of suitable amplitude to all electrodes. This enormously simplified the Power supply problem, rendered regulation errors negligible, and obviated the necessity for voltage circuit monitoring. The “AVO ” Valve Tester thus fulfilled normal testing needs for a long period. During recent years, however, electronic techniques have become much more precise and the nature and multiplicity of valve types have continuously increased. The zero bias mutual conductance figure is seldom quoted by the valve manufacturers, who, usually, publish the optimum working point mutual conductance and voltage figures, and in a large number of cases give full families of curves, from which, precise operation, under a variety of working conditions, can be judged. To cater for present day requirements therefore, a valve testing device should not only be capable of producing a working point mutual conductance figure at any reasonable value of anode, screen or grid voltage recommended by the manufacturers, but should also be capable, if necessary, of reproducing any one of the mutual characteristics associated with the valve in question. The instrument thus has to simulate the performance of a comprehensive valve measuring set-up of laboratory