rT''lIK unquenchable rumors that tele- 1 vision is here in form simple enough ini- home experimentation have led to increased interest, if (hat. be possible, in -liort wave reception. Jlanv of (lie experimental television transmissions take plaee on short waves, such as that from WKNY, New York and WLKX, Boston, Mass. A short wave Receiver was used in these experiments, and it is certain that no matter whai the form, television impulses must he tuned in upon receivers of more or less conventional design, hut of a. higher degree of performance than is necessary simply for sliort-uave code reception. The short, wave Receiver illustrated and described herewith provides (his higher degree of performance, plus freedom from radiation, for (he oscillating detector is isolated from the antenna by a M i-een-grid H.F. amplilier tube. While the average three-tube short wave set will haw ample sensitivity for code signals when in an oscillating condition, the performance when not oscillating is seldom, if ever, satisfactory for modulated or telephone reception (broadcast programs for instance). Tlii-s is because of the fact, that amateurs, interested primarily in C.W. code signals heterodyned by an oscillating detector, have taken little or no pains to obtain the smooth regeneration control absolutely necessary to satisfactory modulated signal reception. In the development, of the four-tube set illustrated, great care was taken to obtain smooth regeneration control; telephone broadcast, programs weakly heard, if at all, on ordinary short wave sets are satisfactorily tuned in on this Receiver with considerably greater strength due to careful design and layout and to additional amplification provided by the screen-grid R.F. Amplifier (ulie. Tliis R.F. tube (Joes not add a (lining control, its input circuit being untuned, yet it boosts telephone signal volume quite a lot, and entirely eliminates “dead spots” at. which (he set, will not oscillate, since it. effectively isolates the antenna from the sensitive detector circuit. LIST OF PARTS 1 S-M 317 or Amsco .00014 tuning condenser. Cl 1 S-M 316B or Amsco .00035 tickler condenser, C2 1 each S.M. 131-T, 131-U, 131-V, and 131-W coils, L2 1 S-M 512 5-prong soekct • 2 S-M 277 R.F chokes, LI, L4 1 S-M 275 R.F. choke, L3 1 S-M 818 hook-up wire (25 feetl 1 S-M 734 aluminum shielding cabinet with terminal strip 1 S-M 255 first stage A.F. transformer, T1 1 S-M 256 second stage A.F. transformer, T2 3 S-M 311 tube sockets 1 Yaxley 20-ohm midget rheostat, R4 1 Yaxley 500 switch attachment, SV 2 Yaxlcv insulated tip jacks 1 Na-Ald 481XS spring socket for detector 1 Polymet .00015 condenser, C5 1 Polymet .002 condenser, C6 1 Polymet .005 condenser, C4 1 Polymet grid leak mount 1 Polymet 5 megohm grid leak, R3 1 Durham 50,000 ohm resistor, R5 1 Sprague >4 mf. condenser, C3 2 Carter H-10, 10-ohm resistors, Rl, R2 1 Carter H-2, 2-ohm resistor, R6 8 binding posts consisting of 8/32 screw', nut, and insulated top 2 National type B vernier dials. An unusual degree of smoothness of regeneration control, freedom from “putting” and “fringe effect” as the set goes in(o oscillation is effected by careful circuit and coil design, notably by using a small coil, which on the lower waves (particularly around 20 meters and be- low) provides smoother and sweeter control than (he two, three, and even four inch short wave coils generally used. The coils are actually a refinement of the popular “tube base" or “Scottish” idea which has been found to give such excellent and economical results. These forms are slightly larger and longer than the average tube base, by dimensions sufficient to allow more efficient coils than are possible on the ordinary tube base (often not available except at the expense of breaking good tubes). A winding space 1Z" long and /" in diameter is available, with tickler slot Is" deep and 1 /16" wide at the filament end. On the bottom of <lie moulded form are five hollow pins, properly positioned (o fit any five-prong A.C. tube socket. These coil forms are so inexpensive that any number of experimental coils for different wave bands can be wound at little cost, to be tuned by any size of condenser that may suit the builders’ fancy. In this matter of “builders’ fancy,” however, it is well to incidentally remark that, while a code Receiver can be (brown together almost any old way and still work, physical placement of parts and wiring details must, he most rigidly watched in order to get a good modulated signal receiver. The set illustrated is mounted on (he top and front of a satin-finished aluminum cabinet, 14" long, f>" wide, and (>” high, with all parts placed in a simple straight line as in a schematic diagram, instead of being tied up in a knot difficult of assembly and “trouble shooting.” Looking at. the inside of the Receiver with bottom and sides removed, the antenna choke coil is seen at the left; next to it is (lie screen grid R.F. tube socket, then the screen grid tube by-pass condenser and plate choke. The 5-prong coil socket is mounted on the other side of the top, on 1" studs, directly above the screen grid tube socket and by-pass condenser. Next is (he grid leak and defector socket, with the tuning eonden.-er directly in front of them; then the plate choke, regeneration condenser, two audio tube sockets, and two S-M Clough-type audio transformers. A 20-ohm rheostat with switch attachment is placed on the panel to control detector filament voltage. All binding posts and Speaker tip jacks are mounted on a small bakelite strip at the rear of the cabinet. National vernier dials are used. The matter of a good short wave variable condenser is an interesting one, for few good broadcast condensers, even of properly reduced capacity, are good at 20 meters and below, for bearing noises develop to 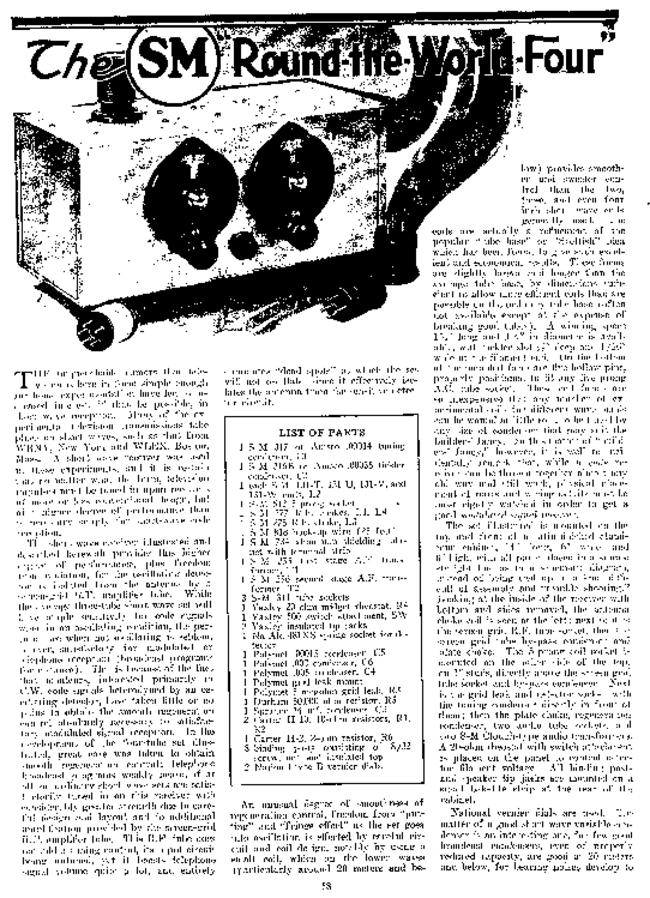